Unconscious Bias in the Workplace: Managing Differences Through Mentoring

A powerful part of the mentoring process is learning with – and from – someone with a different life story than yours.  Even when we try to be sensitive, differences can get in the way. Here’s what you need to know to understand – and overcome – unconscious bias:

Biases – both explicit and implicit – are a pattern of assumptions that form over a lifetime of experiences. Brain science confirms we all have biases. In fact, research has uncovered more than 150 types of bias.

Unconscious bias, sometimes known as implicit bias, refers to biases that we’re not aware of that are related to all imaginable social and physical distinctions between people.

Scientists estimate that the brain receives about 11 billion bits of information per second, while the conscious mind can process 200 bits per second.

It is a natural human response to make judgments about others from our observations, including the colour of someone’s skin, their gender, where they live, how they speak and how they dress. It’s the way our brains try to quickly make sense out of all of the input coming our way.

People make 11 judgments in the first seven seconds of meeting someone.

Biases are made from partial information; they are often inaccurate and can be challenging to change. If biases are not examined and understood, they can provide misleading and sometimes harmful information.

There is a commonly held belief that stereotypes must have some truth in them, or they wouldn’t be stereotypes.

However, when applied to individuals in a population, stereotypes are often completely wrong. And they are not always obvious. For example, a mentor may assume that the idea of starting a business may be more appealing to a woman if entrepreneurship is described in more “feminine” terms rather than aggressive “go out and win” masculine language. In fact, that’s not true: Women react equally negatively to masculine or feminine descriptions of entrepreneurship. Researchers have found that only gender-neutral descriptions appeal to women.

The good news is that biases can be changed through awareness and practice.

Knowing and reducing our unconscious bias and stereotypes can help us in a variety of relationships, including mentoring partnerships.

Research into biases shows that stereotypes and assumptions can be harmful in mentoring due to a phenomenon called “stereotype threat.”

The psychology behind stereotype threat indicates the performance pressure of worrying about being stereotyped, actually creates enough mental “baggage” and negative feelings that the individual cannot focus as much energy on the tasks they need to perform.

Mentees who get an indication that their mentor is making an assumption about their situation due to a negative stereotype may have trouble extending trust in the relationship.

Build your empathy muscle with these 5 bias reduction strategies

Your conscious mind might tell you that you don’t have any biases when it comes to a mentee. The research would tell us that unconsciously, you might. Often we live with unconscious biases that run counter to our stated values and beliefs.

Here are 5 bias reduction strategies to change your mental habits and build your empathy to overcome any unconscious bias:

As noted above, making judgements about others from our observations – the colour of someone’s skin, their gender, where they live, how they speak and dress – is a natural human response to make sense out of all of the input coming our way.

One thing that can help with reprogramming our brains is to make a conscious effort to see people as individuals.

For example, studies have shown that taking the time to really examine the faces of people of different races and seeing the individual characteristics changes the brain pattern from seeing people of a racial group as “all looking alike” to appreciating people as individuals.

Recognize stereotypes that exist in society and those that you may unconsciously default to and actively replace them with non-stereotypical responses to reduce the amount of bias you have.

For example, if your mentee is a single mom, consider your thoughts around what a ‘typical’ single mom with a lower income would be like, based on what you’ve heard or experienced. Counter any negative impressions by picturing alternatives to these impressions.

Another powerful way to reduce unconscious bias is to find “counter stereotype” examples that portray the opposite of a stereotype.

Using the lower-income example above, find and focus on stories you’ve heard about people who may be economically disadvantaged winning at school and working hard to make ends meet.

We tend to spend time with those who share our background. Research also shows we’re generally attracted to those who are similar to us.

Find respectful ways to spend time, more frequently, with those who have differences that are prone to being stereotyped. This is a way to become less reliant on the impressions of others and to become more personally aware of the reality that exists.

Sometimes people will spend a day in a wheelchair to get a sense of what it’s like to be a person with a disability. Or you may try other small experiments, such putting a certain limit on weekly spending to cover gas, food and extra expenditures to build empathy for those living with a low income.

While we can’t change the colour of our skin, we can spend time trying to picture what it’s like to walk in someone else’s shoes.

Finally, remember that while we all have unconscious or implicit bias, when we understand our unhealthy or unhelpful biases we can change them using the strategies outlined above. 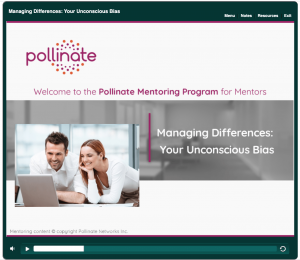 ‘Managing Differences: Your Unconscious Bias’ is available as an e-learning module. See all Pollinate mentoring education resources, including videos and e-learning modules to enhance mentoring productivity and overcome cultural and multi-generational biases.