The call to diversify leadership in every type of organization has never been more amplified than it is right now – and with good reason. The pandemic and concurrent social movements have thrown a spotlight on many types of injustice. In its glare, some hard truths have been exposed about exactly who continues to occupy most of the seats in the Boardroom, or behind C-Suite office doors. Spoiler alert: it’s not racialized people, disabled folks, women, LGBTQI2S+ employees, the foreign-born, or others whose identity wouldn’t fit the criteria for membership into your average Old Boys’ network.

In the event that one or more of these social and political identities intersects in you, it’s even less likely that you will rise to an executive role, according to the numbers. A recent Statistics Canada study found that women in Canada account for only one in four senior managers, and one in five corporate board directors, while representing nearly one in two workers. Just six of this year’s Fortune 500 CEOs are Black; of those six, only two are women.

Despite mounting evidence that corporations, non-profits, governmental, and academic institutions stand to benefit tremendously from making Diversity, Equity and Inclusion a keystone policy, currently only the most forward-thinking groups seem ready to put it into practice. Studies have shown that not only are diverse, inclusive organizations smarter and more innovative, they also make more money. So how does a company take advantage of this equity-seeking momentum? You guessed it: through the interrelated practices of mentorship and sponsorship. If you’re not clear on how to distinguish mentorship from sponsorship, you’re not alone – but it’s helpful starting point to understand that Pollinate CEO Christy Pettit places the latter higher on the Mentoring Ladder. While there can be significant overlap between the work of a mentor and that of a sponsor, there are some distinct differences. Mentors work with individuals on career planning, business goals and aspirations. They present challenges, work through problems, reflect, and offer new perspectives. They also inspire mentees, and cheer their successes while motivating them towards the next milestone. Mentoring relationships typically end when the agreed-upon objectives have been reached.

Sponsorship can look more like agenting, in that a sponsor takes ownership of the individual’s career development. Rather than terminating the relationship once certain goals are achieved, a sponsor takes a special interest in their sponsee’s professional path. They might help them to take on a new project, for example, or recommend them for a position. Much like PR representatives, sponsors provide their sponsees with exposure to people who can advance their careers, offer them opportunities to engage with industry leaders, and “hype” their names and achievements when and where it matters – as Black business leader and Wall Street veteran Carla Harris detailed in her popular TED talk.

Mentorship and sponsorship are both vitally important to the career advancement of people from marginalized groups – and countering claims of tokenism, for that matter. Executives from diverse backgrounds tend to be more qualified than their cis white heterosexual male peers. A recent study from the University of Georgia and Stevens Institute of Technology analyzed thousands of CEO appointments from 2001 to 2020, and found (amongst many other surprising, encouraging results) that 93% of Black CEOs held advanced degrees, compared to only 53% of white CEOs. The bar is literally higher for racialized employees; to even be considered, a candidate must be exceptional.

That’s probably because matter who you are, or how you identify, you’re carrying some unconscious biases. Acknowledging and unpacking those is key to the successful mentoring and sponsorship of anyone, but particularly racialized, Queer, and disabled people, and women. If mentorship and sponsorship programs are going to effectively foster the ideals of diversity, equity, and inclusion in your organization for the benefit of all, Pollinate’s CEO Christy Pettit suggests building on these four foundational blocks:

1) Mentors equipped with a working knowledge of contemporary diversity principles such as privilege, intersectionality, unconscious bias, and lived experience. A mentee should hopefully not have to educate any mentor about the basic facts of racism, ableism, colonialism, homophobia, xenophobia, or any other -ism or –phobia at this point in history. If mentors have never experienced the effects of these biases firsthand, however, it can be frustrating and time wasting for mentees to continually fill those knowledge gaps. 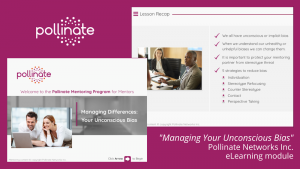 2) Provide professional development to avoid “stereotype threat,” which can be triggered when a mentee (or sponsee) realizes that a stereotype about the group(s) to which they belong is being applied to them. They become uncomfortable, and start performing, in order to distance themselves from the negative stereotype. This loss of comfort – and the attending perception that the mentoring space is not a safe place to be oneself – can seriously damage the relationship, and undo good work. Pollinate Networks has created specialized resources to help people examine, work through, and overcome their own unconscious biases to prevent this scenario. The Managing Differences: Your Unconscious Bias module was designed with mentors and sponsors in mind, to help avoid the communication obstacles that a lack of awareness around diversity issues can inadvertently create

3) 1:1 or small group connections for diverse employees who want to move up in the organization. These close relationships become fundamental to breaking down barriers between people, and building empathy. Learning someone else’s story – and sharing yours with someone else – is an extremely effective way to shift your perspective, with benefits for both parties in a mentorship or sponsorship setting. But especially if the goal is diversifying Boardrooms and the C-suite – where a certain country club mentality can still prevail – a trusted and established sponsor who knows your story can be your most powerful champion.

4) Formalize sponsorship in addition to mentorship programs. It’s great for people of all backgrounds to get more one-on-one advice, and work through challenges and towards goals with a trusted mentor – but the mentorship process alone doesn’t necessarily lead to opportunities, particularly for senior roles. If your organization has been putting effort into DEI, but it doesn’t seem to be producing a more diverse workplace culture, especially at the leadership level, then sponsorship is the way forward. Especially in STEMM fields, women and racialized people need to be sponsored into these positions – mentorship alone is not enough.

While sponsorship is a widespread practice in organizations and networks across all sectors, statistics and studies reveal that it’s clearly not happening as much for people from diverse groups. A commitment to formalizing both mentorship and sponsorship programs would yield measurable, tangible results. Companies and institutions that make the effort can mitigate the diversity imbalance in their upper ranks. Mentorship and sponsorship of diverse team members not only propels talented employees towards the success they deserve, but will also have a positive impact on both workplace culture and the bottom line. 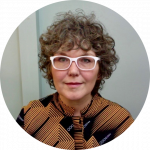 Anne is a freelance writer and editor who has been writing articles, listicles, advertorial, blog posts, interviews, profiles, case studies, assessment tools, cover letters, surveys, oral histories, “Best Of”s, newsletters, correspondence, and other prose for a variety of clients – private, commercial, corporate, non-profit, and journalistic for many years. If it needs to be written, Anne can probably write it.