The Magic of the Match: The Origin Story of Cross-Pollinate AI

I remember when I realized how important the match is when it comes to finding a mentor. It was in 1998, when I was seconded to be a fractional executive from my job at a mid-sized company to a very large company. My assignment was one of the biggest jobs I had ever had at that point. I had to figure out how to save them two million dollars, and I had to do it in five months so that they could hit their EBITA target.

I had an idea of what I should do, but felt out of my depth in this complex environment. My boss was a good mentor to me, but at that time he was really taxed. I had to find another mentor to help me do what I needed to do, and my business partner, Giovanni Salas, introduced me to someone with the experience I needed.

My mentor helped me understand at a deeper level how corporate relationships work in a company of that size, and how some of the structures were functioning. They deepened my understanding of the personalities involved and how people’s personalities show up in different ways at work. In the end, I got a fantastic outcome and we saved more than two million dollars because of a team effort inside the organization that I was able to facilitate.

As well as the project had gone, I noticed something about that mentoring relationship. I realized that I was doing a lot of translation between their suggestions and how I am wired to do things. My mentor would say something, and I knew that I would not be able to do it quite the same way. Some things suggested just weren’t me. I didn’t bend in that direction.

As we continued to study mentorship and mentoring, we found that to smooth these differences out, there are two possibilities to consider:

First, avoid being paired with someone where the styles are incompatible, or provide some assistance when there are differences, so people can educate themselves to negotiate those differences from both sides. To make the different styles plain, we looked for an assessment tool that would predict mentoring outcomes. Nothing did exactly what we wanted, so we decided this was important enough to create our own. Originally, we came up with a list of 12 elements of personality and perception that we hypothesized would make a difference to how mentoring pairs work. Our first group of 400 mentors and mentees studied found that it was actually only seven of those things that made a true difference to how quickly and effectively knowledge was shared. There are a total of three tendencies and four preferences that make up the Knowledge Transfer Index (KTI). Refinements have been made within the seven areas since, but through several follow up experiments, they continue to hold as a good predictor of collaboration success.

Secondly, we discovered that purpose is as important as personality. We’ve paired the KTI with an “intake assessment” created with flexible fields designed to gather relevant information from the context of the collaboration or mentoring program.

In summary, this combination has become our psychographic approach to matching: Who are you and how “do you do”? The flexibility in the intake and the ability for the KTI to predict and educate for collaboration success enables us to throw switches and get the matches just right without overtaxing participants or administrators. The key is to have a safeguard against having pairs and groups that stall out, and to set people up for success right from the start. 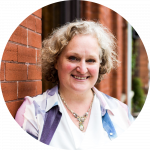 For 25 years, Christy has developed new approaches and best practices for agile, effective organizations worldwide. She is an expert on matching people and organizations for applications including knowledge transfer and mentorship programs, flexible virtual and hybrid teams, and productive organizational and business ecosystems and networks.

WEBINAR: Mentoring and Sponsorship as Part of Your Diversity and Inclusion Strategy

WEBINAR: Stress Management Through The Holidays

Take a deep breath and take a little time for self-care. Join us for